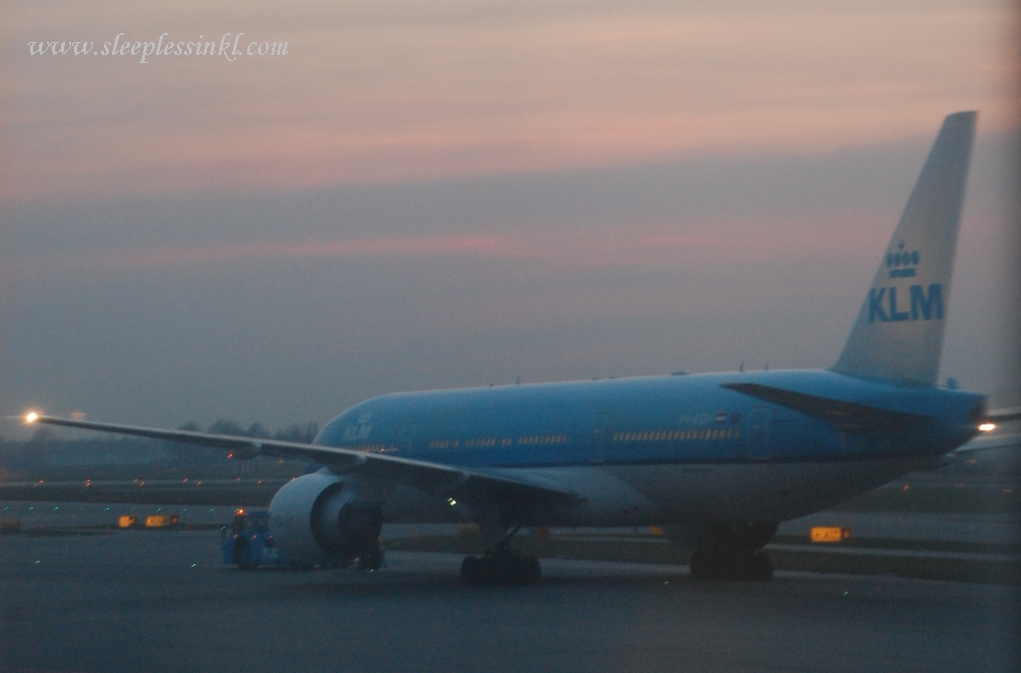 Lola and I flew on KLM all the way for our whirlwind European escapade, except for the Geneva-Paris leg of the journey, which we did on the TGV (Train de Grand Vitesse, literally: “train of great speed”). I’ll deal with the TGV experience on another post soon.

The in-flight menu was quite pathetic for this trip, but I really, really, really love KLM’s internet check-in feature that allows you to check-in for your flight as early as 30 hours beforehand! You simply go to KLM’s website, enter your booking code or e-ticket number and your flight number, pick out your seat, print out your boarding pass, and voila! You are checked in.

For the KL-Amsterdam sector, we flew on a Boeing 747-400 aircraft and I was quite pleased with the seats that I picked out for Lola and I — 63H & K. Seats 63 to 66 are arranged as two-somes, i.e. two seats per row instead of the usual three, so there was extra space beside the window seat (K) for hand luggage. If you’re the type who likes to lean on the window to sleep, you may not like this, but I liked the feeling of extra space beside me. And if you happen to be travelling alone, it’s a convenient way of making sure you have adequate space between you and the person seating beside you, so that you don’t end up accidentally leaning on him/her once you doze off.

DH actually flew with us to Amsterdam (and later on, to Geneva) but, unfortunately, when I checked-in online for the three of us, I could not get three seats next to each other. So he had to sit behind us, right next to a Dutch gentleman who turned out to be a historian.

I wanted to get for us the seats with extra legroom (35BC & HJ and 51BC & HJ were available at that time) but then I found out that we’d have to fork out an extra 50 Euros each for those ‘special’ seats. End of ‘brilliant’ plan right then and there…

Seatguru.com has the standard layout of KLM’s Boeing 747-400 here, for your easy reference.

What KLM lacked in the palatability of their food, they more than made up for with their flight attendants’ service level and attentiveness to passenger needs. They were friendly, helpful and smiling and really left a good impression on me.

I was quite perplexed by their beverage policy though: passengers who asked for beer got a full tin of Heineken every time, but passengers who asked for a Coke or Sprite got a mere cupful, which is, like, half a tin. Then I searched the internet and found out that Heineken and Air France-KLM have a three-year exclusive marketing partnership effective December 2007. That pretty much cleared up the issue for me.

In-flight entertainment is nothing compared to Emirates Air, as each passenger in Emirates Air — even in Economy — gets their own personal screen and watch movies on demand — as in, you can start, stop, rewind, fast-forward through a movie anytime. KLM still utilises one of those mini-TV screen-like monitors suspended from the ceiling every few meters or so, so when a passenger in front of you gets up to go to the loo or stretch out, they tend to block the view. You have to crane your neck to watch the movie, if you are vertically-challenged, which is not very nice for a 12-hour flight. But then again, it was a night flight and I spent most of it sleeping (somehow, I managed to sleep!) so it wasn’t such a big deal for me.

As a whole, I was still pretty pleased with our long-haul flight experience with KLM. Their routing is perfect for this particular trip, the service was excellent, the timing and frequency of the flights suited our schedule, and, best of all, we got an unbelievably good deal with the airfare: RM2,800 for KL-Amsterdam-Geneva, Paris-Amsterdam-KL plus a little over RM1,600 for taxes (but non-refundable, non-reroutable, non-exchangeable, dates unchangeable and had to be booked months in advance).

I’ll definitely fly with KLM again in the future.

Posted under Travel and tagged with KLM, reviews
Comments (2)

2 Responses to Flying with KLM