Geneva to Paris by TGV 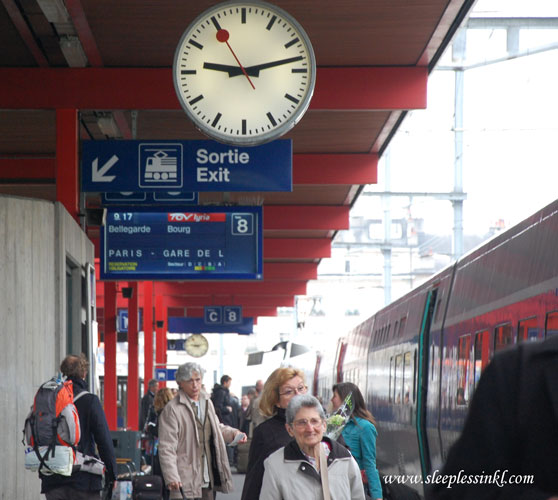 Lola and I took the TGV (Train de Grand Vitesse – train of great speed) from Geneva to Paris for our recent European adventure. I bought the tickets in advance from RailEurope‘s agent in Malaysia, Boustead Travel, because I couldn’t buy the tickets online using my Philippine passport (or, I assume, any non-European passport for that matter). But if you are already in Switzerland, you can purchase your TGV tickets from the nearest Swiss Rail office.

We boarded the TGV at Geneva’s main train station, Cornavin. The trip was as pleasant and as smooth as any European train can get that it didn’t matter that we bought second-class tickets.

But the trip wasn’t without any surprises though.

The second surprise was the delay. Knowing how the Swiss are such sticklers when it comes to punctuality, I was really stunned that our train was actually late by a good 10 minutes. Then it dawned on me that the TGV is operated by the French SNCF. It’s a French train, not a Swiss train. <Hits hand on forehead> Duh!

The third not-so-pleasant surprise was the scenery. Or, to be more accurate, lack thereof. The French countryside was so blah and dull and nothing at all like the Swiss countryside. I had in mind the lush green meadows and snow-capped mountains and shimmering blue lakes that you’re bound to see when you take the train between Zurich and Geneva. And I was sorely disappointed to not have even seen a glimpse of the Alps. Oh well…at the rate the train was moving, getting decent pics was a serious challenge any way. See the blurry tree on the lower right hand side? That was because of the train’s speed; not camera shake for once. 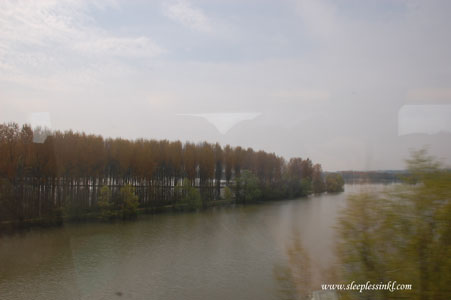 See how dark and gloomy this photo is? That’s how exactly the French countryside looked that day, as though it was on the verge of raining all the time. The only reason why I kept this photo is because it looks like something out of an Impressionist’s painting.

Watch what happens when I work some Photoshop Elements magic into it. Lemme see… Enhance > Adjust Lighting > Fill Flash. Tweak it a bit further by increasing the saturation a bit. And then… Filter > Artistic > Paint Daubs. And voila! ‘Ere eez a painting of zee banks of zee river Seine by zee famous Dutch impressionist XYZ who lived in Paris in zee 18th century… ;) Just try to ignore the reflections on the glass window, which I didn’t have the time to edit out of the photo. 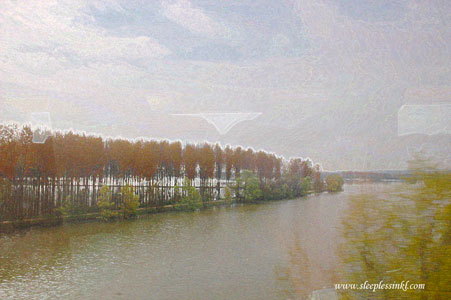 Okay, so the view was disappointing. At least the trains were clean and well-maintained, I tried to console myself. The loo was very clean too although it could have used a nice dose of eau de toilette. [Side note: I’ve always wondered why they call it ‘toilet water’.]

Surprise number four? No one inspected our tickets. I felt rather silly spending my precious Euros for a one-way ticket when I could have easily boarded the train and gotten off without one. Of course, had there been a spot check and had I been found wanting of a ticket, it would have meant a heavy fine… Or jail… Or maybe both. <Shudder!> Okay, so I’m being a bit speculative here.

Finally, the last surprise wasn’t that much of a surprise. No immigration at the French side either. So my passport doesn’t bear any French stamp and I have no official proof that I have been to Paris. I do have 538 or so 834 photos of various places in Paris as proof that I have, indeed, been to the City of Lights. But they’re photos and can never take the place of an official stamp on my passport :(

My verdict on the TGV? It’s fast — in less than 3 hours, you’ll find yourself already in Paris’ Gare de Lyon station — and it’s much, much cheaper than taking the plane. So I say go right ahead and take the TGV as long as you don’t have too much luggage to lug along with you.

Posted under Travel and tagged with Geneva, Paris, TGV
Comments (5)

5 Responses to Geneva to Paris by TGV