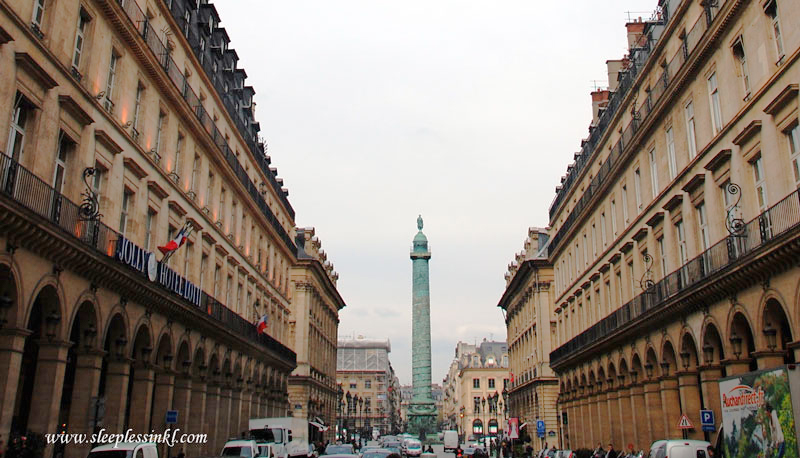 It’s true that it’s very convenient to see the major sights of Paris via tour bus. However, in order to know Paris more intimately, you simply must explore it on foot. It’s the only way for you to truly experience this enchanting, historic city, with buildings that date back to the 19th century, massive monuments that bear witness to the grandeur of its past, charming little shops that are tucked away in the most surprising of places, cozy cafés that proudly highlight their ‘terrasse chauffée‘ (heated terrace) whose tiny chairs are crowded behind equally tiny round tables so that people can sit side by side each together in order to face the street and get a good view of passers-by!

But before you set off, bear in mind that three things are absolutely essential for this endeavour — time, stamina, and a good map of Paris.

Paris is huge, that’s why you’ll need a lot of time to explore its every nook and cranny. If you only have a couple of days in Paris, try to allocate at least a couple of hours for walking along within its tiny cobbled streets. Perhaps, you can walk the short distance between 2 major points of interest, such as the Jardin des Tuileries and the Louvre.

When Lola and I were in Paris, we walked from our hotel near Châtelet-Les Halles all the way to the Paris Convention and Visitors Bureau in Pyramides, near Place d l’Opera. The walk — which included a quick stop at a café, some window-shopping, some aimless wandering around, taking tonnes of pics, and buying a few souvenir items — easily took up an entire afternoon. Considering that the area was right in the heart of the city, I was most surprised to note — even though Lola was the one who pointed it out to me — that most of Paris’ streets are small. We found ourselves wandering farther and farther into the Jardin des Tuileries, then the Louvre. If not for the bitter cold, we probably could have done a bit more of exploring that day…

Covering huge distances in Paris’ cobblestoned streets requires a lot of stamina, so come prepared with comfortable walking shoes, a small bottle of water in your bag, and a foldable umbrella, just in case it rains. If you find a charming little coffee shop tucked away in a corner, by all means, stop and refuel. A cup of coffee only costs €1. At least, it did in April 2008, before petroleum prices went up for the nth time, sparking massive protests all over the globe, an issue which I shall not delve into further in this blog.

So where were we? Ahh, stamina. Yes, you’d need this, as well, for going up the Arc de Triomphe or the tower of Notre Dame. Details in two separate posts, as each of these landmarks are worthy of individual posts! 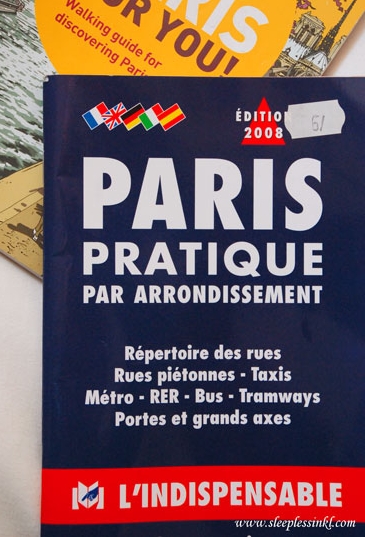 A good map is an absolute must-have when exploring Paris on foot. And it goes without saying, one must have the ability to read the map that you have in hand, as a map without map-reading skills would render it utterly useless.

It’s nice to literally get yourself lost in the City of Lights but when the wind starts blowing stronger and darkness begins to fall, you need a map to figure out exactly where you are so that you can find your way back to your hotel. Unless, as they say in French, si tu as des sous (slang for: if you have a lot of money), just can always take a taxi. But that would take out all the fun out of exploring, don’t you think?

I got free maps from the Alliance Française in KL , like, two months before our trip, and a second map later on from the Paris Convention and Visitors Bureau. Neither map, however, listed down the smaller streets and alleys, so there’s the tendency to get a bit confused when you suddenly find yourself in a small alley that’s not included in your map.

Fortunately, thanks to David Lebovitz’ blog, I got to know about Paris Pratique Par Arrondisement (Practical Paris by Arrondisement). As you may or may not know, Paris is divided into 20 arrondisements or districts. By mere mention of the arrondisement of a certain shop or house, Parisians immediately get a quite precise idea of its location. Paris Pratique Par Arrondisement is a small booklet with detailed maps of Paris, broken down by arrondisement. The maps include the smallest of alleys. There’s also an index of all of Paris’ streets, which have reference numbers that help you find them easily in the maps. The booklet also has Metro, RER, tram and bus routes. David Lebovitz said the version that he has even includes outdoor markets in the city by day and location, addresses for all the cemeteries in Paris and the location of gas stations and taxi stands!

Paris Pratique Par Arrondisement was the first thing I bought the moment we got into Paris. It cost €6 from a local newsstand and it was arguably the best €6 that I spent in Paris because it was comprehensive, precise and I should be able to use it again for my next trip to Paris (hope springs eternal, as my old friend, Joey used to say!). I find it makes a nice souvenir, as well, because there’s nothing quite like poring over a map long after the journey’s been done, retracing your steps and marveling at the distances you’ve covered on foot!

The small booklet is entirely in French but you should still be able to figure things out. David Lebovitz says even locals use it to find their way around Paris, so it was perfect for me, because I wanted to blend in as much as possible and not look like a tourist. Unfortunately, I forgot that I had my camera hanging by its strap around my neck most of the time, which was a dead giveaway. Eventually, it dawned on me that the city is inundated by thousands of tourists at every turn. At one time, we found ourselves walking up to a couple who look like locals to ask for directions, then we suddenly realised that they, themselves, were also clutching maps of the city! So in the end, it didn’t matter that I was a tourist. I was doing all the tourist-y things anyway — taking pics of anything and everything, riding a tour bus, going on a cruise in the river Seine. But it felt good to pretend to be a local by brandishing out my Paris Pratique Par Arrondisement whenever I needed to find out which street corner we were at any given time. So it goes without saying that one of the high points of our trip was when we were approached by some tourists inside a Metro station because they needed directions and they thought that we were locals! 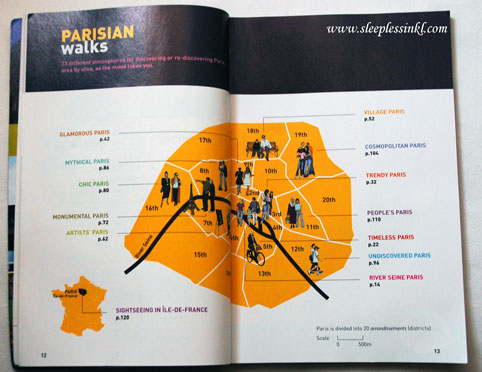 Positive things about the guidebook? It shows a mini map of the area to be covered on foot, with a short description and a brief history about the various places of interest along the way. It also lists down the opening days and hours, as well as the day(s) when that particular place is free to the public, if applicable. Anything that involves free stuff is always very useful info!

On the downside, I find it sadly lacking as a guidebook because it doesn’t give the specific route from point A to point Z. You basically have to find your way on your own. And given that the maps included in the booklet are not detailed enough, you’ll probably find it handy to have Paris Pratique Par Arrondissement to complement the guidebook.

With so many things to see and experience in Paris, I seriously doubt if one whole month is enough to explore the length and breadth of this beautiful city.

One Response to Exploring Paris On Foot