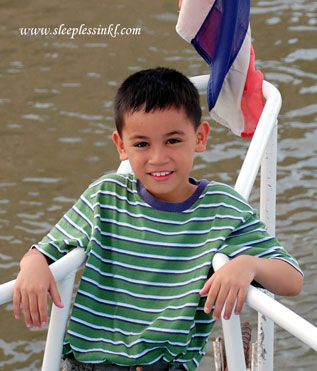 I’ve been writing about MyEldest in several posts in the past and I’ve always found it weird referring to him that way. I mean, there’s no issue if I’m the one talking about him. But when people want to make a comment, how should they refer to him? “MyEldest”? “YourEldest”? Either way, I find it weird.

Trust me, I’ve racked my brain time and again to think of a more fitting pseudonym for him. ‘FirstBorn’ did come to mind in the past, but I thought it sounded a bit too formal. I was also tempted to refer to him as ‘The Original Baby Boy’ (because I used to call him ‘BabyBoy’ when he was a baby) and just shorten it to TOBB or something but I eventually decided against it. Knowing how tech-savvy my son is, I know it will only be a matter of time before he stumbles into my blog and I don’t think he’ll appreciate that nick. And when he does find my blog, I hope he’ll think – ‘Cool! My mum blogs!’ ;) 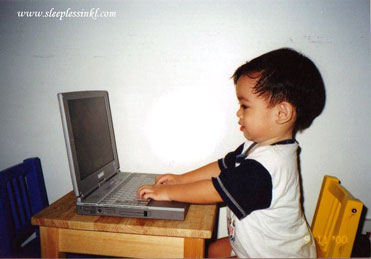 And speaking of computers, I seriously believe that boy is A-Computer-Whiz-In-The -Making. He started off awfully young with computers, banging away on his grandfather’s laptop to play ‘Jumpstart Baby’ and ‘Jumpstart Toddlers’ when he was just a little over a year old. Nowadays, his friends always call on him for help whenever they find themselves stuck in a certain level in some computer game. He signed up for a Gmail account without my knowledge and he got his Lola all confused when he changed the settings and moved things around in her desktop. When I introduced him to the basics of HTML, you could almost see a light bulb light up above his head, like in the cartoons… but I discontinued the lessons because he started asking me about his own website, a responsibility which I feel he’s not ready for yet.

And there are just too many facets in his personality to pick out only one aspect and use it as his nick. For instance, I thought about ‘WalkingEncyclopedia’. Because he is one! He soaks up information like a sponge and likes to spout off random facts and figures at the most inopportune times. “Mama, do you know that if you leave a photocopying machine on at night, it will use up enough energy to make 5,300 A4 copies?”. Or “Abah, do you know that aliens exist?”. He will then give a lengthy, detailed explanation on the subject.

Or how about ‘InquisitiveOne’? Because he is one very inquisitive boy. He loves to learn how things work, reads the book “How Stuff Works” from cover to cover countless times, and loves watching TV shows like ‘MythBusters’ and ‘How Do They Do It?’. Once I told him about how a chilli pepper’s heat is measured in Scoville units, when he suddenly asked me “But how much, exactly, is one unit? Is it grams? Liters? Milliliters?” and I had no choice but tell him to Google it up. I wouldn’t be surprised one day if, out of the blue, he’ll ask me stuff like “What are Ebac dehumidifiers for?” which, considering, is not as difficult as one question he once asked me when we were at the checkout counter of a French hypermarket. He pointed at the row of…err…prophylactics which were displayed on shelves just under the chocolate bars and asked me what those things are for! To buy myself some time to think of a suitable answer without going into too much detail, I told him we’d talk about it at home. In the end, I just told him that it’s something that adults use to prevent pregnancy! 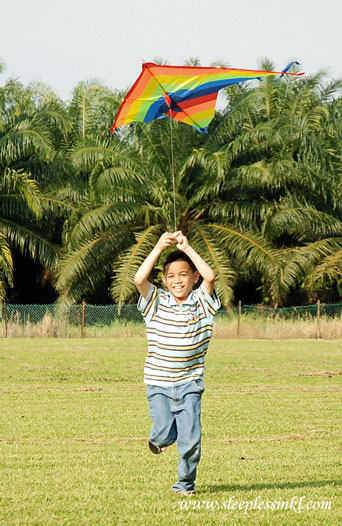 Next on the list is ‘EnergizerBoy’. Because my boy has the energy of the Energizer bunny and can’t stay cooped up inside the house for too long. He’s happiest running around in a wide open field (or along the aisles of the local hypermarket, for that matter!) and riding his bicycle around our housing area. He has a daredevil streak in him, that boy. Just the other day, as I was rounding the corner to go into our street, I was horrified to see him riding his bike with both legs up ON the handlebars. He and I had a heart-to-heart talk about the dangers of such stunts just this morning.

Then there’s ‘Bookworm’. You might think this sounds unlikely, but it’s true. For a boy with so much energy bottled up inside him, he can actually keep still for hours on end when he’s curling up with a good book. He’s turning out to be a voracious AND fast reader, easily finishing Frank L. Baum’s ‘Wonderful Wizard of Oz’ in a little over an hour. And because he reads intensively, his vocabulary is above average for his age. Why, just a few weeks ago, OnlyGirl was reading ‘Harry Potter and the Deathly Hallows’ and there were some words that she didn’t understand. So she asked her elder brother what those words meant and I was so amused to listen to him giving her the definitions in his own words, which were quite accurate.

Or how about ‘TheFighter’? In the figurative sense, he doesn’t give up easily. Somehow I managed to drill into him that if you start something by thinking you can’t do it, you’ll never be able to do it, so you’ve got to start by saying you can and, eventually, you will. He believes in it and he practises it! As for the literal sense, he is very dedicated with his tae kwon do training, insisting that I send him for extra classes on weekends, and he absolutely enjoys tournaments and grading, never flinching during free sparring. In a a recent tournament, he won the silver medal for free sparring under 30 kg. He bravely fought boys who were much bigger and taller than him and I’m proud to say he even knocked down one of them :D

So what will it be? I haven’t been feeling particularly creative lately and need your suggestions.

Posted under Children and tagged with Children, kids
Comments (6)