The Tuileries Gardens in Paris make for an interesting stroll. It’s a sprawling park with trees, mallard ducks playing hide and seek amidst the tulips, and ancient statues. But stay away when it’s a windy day lest you find yourself in a virtual dust storm because a huge portion of the area is comprised of bare earth.

Between now and the 2nd of June, 2008, if you do visit the Tuileries, be prepared to come face to face with a gargantuan black spider, about as tall as a tree. Or to be more precise, 30 feet (9.1 m) tall. 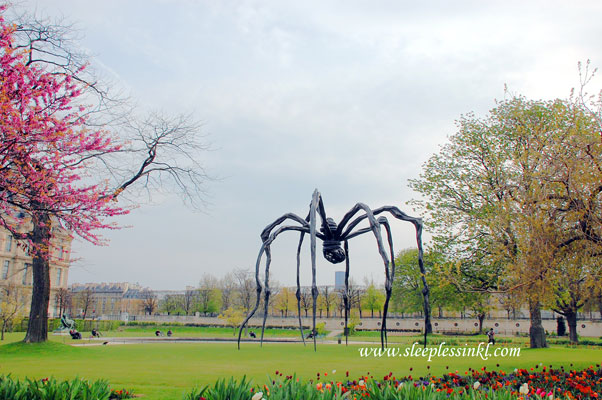 It’s actually a sculpture by artist Louise Bourgeois, one of the seven bronze casts, with a stainless steel version on long-term loan to the Tate Modern, London. The six other bronze casts are located at:

I hadn’t planned on posting this pic because I find it quite creepy (I hate creepy crawlies!) but then I saw a photograph of the same spider in Kayni’s Corner Cafe, although I didn’t know yet at that time that there are several casts of the same sculpture. That’s why there’s no oomph in this photo. I just snapped away without thinking of composition or angles, just focusing on showing its size relative to the trees.

The sculpture is, interestingly, called “Maman“, which is French for “Mama”. I found the choice of name bizarre, at the very least, for a spider. Curious, I immediately googled it up and found out from Guggenheim Museum’s website that the sculpture is actually associated with the artist’s own mother (seriously!). According to the site: “The spider, who protects her precious eggs in a steel cage-like body, provokes awe and fear, but her massive height, improbably balanced on slender legs, conveys an almost poignant vulnerability.”

Posted under Travel and tagged with Paris, spider, Tuileries
Comments (5)

5 Responses to Maman At The Louvre/Tuileries