The Holland Herald, the inflight magazine of KLM Royal Dutch Airlines, recently held a ‘Very Short Travel Story’ competition (which I missed somehow — something quite strange considering how often I fly on KLM). 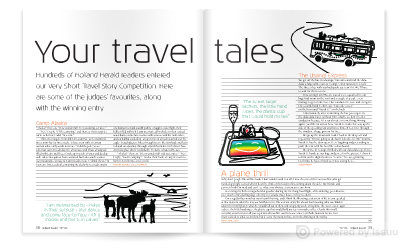 They printed eight of the judges’ favourites in the March 2009 issue, along with the winning entry.

Love In The Air

I am first on the plane for a KLM flight from Amsterdam to Johannesburg. I am sitting in window seat 15A. My plan is to catch a film and a bit of shut-eye before landing. The flight attendant tells me the flight is full. My heart sinks: there goes my vision of stretching out over two seats. A small boy is sitting in 15C. I wonder who will occupy 15B. A snorer? A talker? Please, no! Then a discussion: the child is standing, bags are moving and the stewardess is orchestrating the move like a seasoned choreographer. In place of the small boy now is a man, a blond Adonis with a ready smile, putting his bags in the overhead locker.

I look up to him and say, “I think we’re going to be lucky…” These words are prophetic, but at the time I am referring, of course, to the seat between us. The doors shut and 15B remains unoccupied; the only free seat, as far as I can tell. We take off, and over the empty seat we strike up the best conversation of my life, spanning travel, literature and the virtues of chocolate. Somewhere over the Sahara, real magic happens; divine chemistry is at play. By the time we land, plans are being made. “Do you want to have dinner?” he says. “I do,” I say.

Eight months later I face him, beaming, and say “I do” in a garden chapel in Africa.

This is a KLM love story…and it’s all true!

“Alaska!” they say. “How wonderful! Are you doing a cruise?”

Thirteen strangers, from different countries, we’re crammed in a mini-bus for three weeks. I share a tent with a German woman whose only words to me are: “Hold the pole,” as we construct our tent each day. It is a heatwave and I have a backpack filled with jeans and fleece. I wake up in pools of water and develop welts where mosquitoes have swarmed. But I also watch a sunset over mountains so majestic I am moved to tears. I “drink the toe” in Dawson City [a cocktail containing the alcohol-preserved remains of a human toe] and watch puffins struggle to take flight, their bellies filled with fish. I am mesmerised by whales in their sensual water dance, come face-to-face with a moose and her twin calves, and eat halibut cooked on an open fire on a beach watched over by eagles. I touch glaciers, hike through forests like fairylands and learn to kayak on a journey through a fjord that makes me believe I have entered a place where God dwells. I return, exhausted by awe.

“Alaska!” they say. “How wonderful! Are you doing a cruise?”

“No,” I reply. “I’ll be camping,’ and then, as their surprise turns to horror, I smile my secret smile.

I could not see the look on my face when I stood with a complete taxi door in my hands in Shanghai. I may have some strength, but the experience of ripping a door out of a taxi was new to me. The driver overwhelmed me with a torrent of words, which I did not understand, but it was clear that he was not pleased with the situation. After two minutes, the crime scene was surrounded by Shanghai inhabitants who were laughing themselves silly. What type of businessman am I? I felt helpless: driver shouting, spectators enjoying this outdoor event. Suddenly there was a twist, the driver pushing me into his car, and carefully managed to put back the door. This was rather strange, how did he…? I started to feel relieved on my way to the hotel, until I saw the doorman who normally opens doors, including taxi doors. With wild gestures I tried to prevent this, but there it went again, a totally amazed doorman with a taxi door. The scene that followed was somehow familiar, the expression on the doorman’s face must have been the same as mine 30 minutes earlier.

A tough discussion for compensation, lasting 15 minutes, followed. Starting with $100, the taxi driver finally agreed to $3. And off he went looking for new victims in business suits; his way of opening doors for a new car. Just another 1,000 or so customers to go.

We’d driven all night to reach Saltillo, Mexico. The morning sun was gaining strength, reflecting off the stucco and adobe walls of the colonial city. No trees, no shade. We needed rest, so we parked by a door under a big, red Coca-Cola sign, and went into the tiny restaurant for some much-needed breakfast. We plopped down at the table, and in my high-school Spanish, I greeted our waitress, ordered some coffee and eggs and requested an ashtray. The waitress served us and then stood at the kitchen door, watching us and anticipating our every need. The cook stood behind, peering over her shoulder. While I dipped my yolk, I commented to my friend on the sparseness of the restaurant, but he replied that the food was fine and the service couldn’t be beaten.

We finished our food but needed a little more time to rest, so we asked for seconds on the coffee. We took our time, smoked some cigarettes, chatted and finally, when we felt somewhat refreshed, I asked for our bill. To our surprise, the waitress refused to give it to us. She said we were travellers, and she was happy to serve us. I insisted, I said this was a business and I was happy to pay for the excellent service and food. “No señor,” she said. “This is not a restaurant — this is our home!” When we stepped outside into the blazing sun, we found a Coca-Cola sign hung over every doorway!

My thanks to Holland Herald for giving me permission to reproduce this portion of the original article in my blog.

Posted under Travel and tagged with KLM
Comments (21)