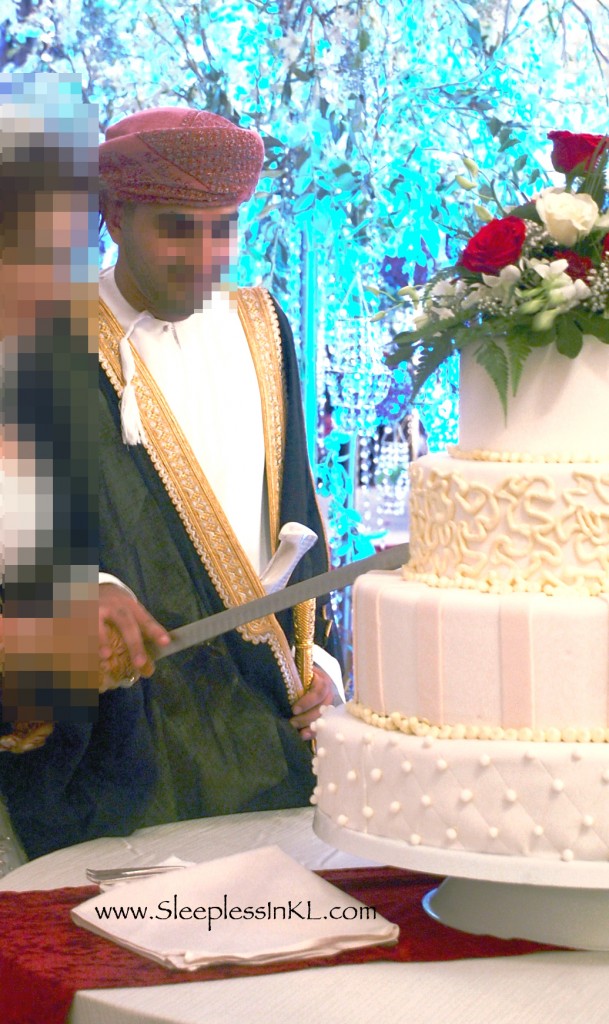 I was in Muscat, Oman last week to attend the wedding of the daughter of a very close family friend and business associate. Our families have known each other a long way back. As in, I’ve known the bride since before it became obligatory for her to cover her hair, i.e. long before she reached the age of puberty.

For starters, let me give a short background on Omani customs when it comes to weddings. The wedding ceremony, which they call the melkah, is done in the presence of the bride’s and groom’s respective families and very close family members only. After the melkah, the bride still continues to live in her parents’ house. Whenever the groom visits, the bride no longer has to cover herself like she does in public. However, all the visits remain chaperoned. And they only live together as husband and wife after the marriage is officially ‘announced’ at the wedding party. The time period between the melkah and the wedding party can be anywhere between several months to a couple of years or so.

As for the party, ahh..now this is where it gets very interesting indeed.

First off, the wedding is for females only. All the staff on hand (photographer, videographer, waitresses) are all female, as well. And not everybody allows to have their photos taken.

On the night of the wedding party, starting at around 8 pm, you’ll see all those women clad in black from head to toe being dropped off by their chauffeurs/brothers/husbands/etc at the venue of the party. In this case, it was the Grand Ballroom of the ultra-posh Al Bustan Palace Hotel. However, the moment those women enter the doors of the ballroom, the black outer garments are shed off — just like a butterfly emerges from its chrysalis — revealing opulent evening gowns, elaborate hairstyles, and jewelry worth a king’s ransom. By evening gowns, I mean evening gowns worthy of a red carpet event, such as the Academy Awards, of every style and colour imaginable. I felt like I was a spectator in an impromptu fashion show…or the evening gown portion of a beauty pageant…which was also, at the back of my mind, an amusing gallery of fashion hits and misses.  As for the hairstyles, I mean upswept hairdos, hair cascading down bare backs or shoulders, hair shimmering with Swarovski crystals, hair adorned with jeweled combs (which I bet feature real gems!).

The moment you enter the hall, very loud, pulsating Arabic songs blast off from speakers from all corners, making normal conversation impossible, unless you shout at the top of your voice. The music is for dancing, of course. Yes, dancing. Because the first 2 hours or so of the party will feature women dancing uninhibitedly on a special wooden deck in the middle of the fully carpeted great hall. They sing along, clap, cheer for each other with the zaghareet, a high-pitched ululation done with the tongue, commonly used in the Middle East is to honor someone, akin to a “bravo” or applause.

At around 10 pm, they announce that the buffet is ready and people take their turns partaking of the feast. Me? I played photographer for the night, albeit unofficially, so  I was too busy clicking away that I didn’t have time to line up at the buffet tables. Thankfully, a friend took a plate of food for me, bites of which I ate in between photographs. Yes, 10 pm sounds rather late for the buffet to begin. But from the start, all tables have some tidbits for the guests to nibble on — Arabic flat bread, hummus, baba ghanoush, feta cheese, stuffed grape leaves. As the Malays would say, alas perut (“to line the stomach”), just to keep hunger at bay.

As people eat, the dancing goes on, the dancers mostly composed of the close family members from both the bride’s and groom’s sides.

At around 11, the bride makes her grand entrance. The entire hall is plunged into darkness and the spotlights are trained on the door at the rear of the ballroom. Three little girls wearing identical white dresses appear, scattering rose petals along their path. Then the bride emerges, walking slowly on the red carpet, all smiles, clad in a Western-style sleeveless white wedding dress sparkling with hundreds of crystals (Swarovski, no less), her bare arms covered with intricate henna patterns from all sides and all angles, her hair upswept in a chignon, a shimmering tiara holding a long veil in place. By long, I mean, as long as a train. And glistening with hundreds more of those crystals, as well. She walks up to the elevated dais in the front portion of the ballroom, where a decorated love seat awaits. The official photographer takes several photos of her alone, then with family members and friends. At some point, the dancing begins again, despite the continued photo sessions at the elaborate dais.

This goes on until about midnight, when, suddenly, an announcement blares over the speakers that sends everyone into a frenzy. Just like Cinderella scrambling to leave the castle at the stroke of midnight before her coach turns into a pumpkin, all the women in the crowd are rushing to cover their hair and bare arms. All except the female members of the groom’s family, that is. Even the bride dons a white cape to cover her hair, neck, shoulders and arms (think: Little Red Riding Hood, except that the hood/cape is white).

Why the panic, you may ask? It’s because the time has come for the groom and male members of his family to make their appearance in the wedding party. They walk the same path on the red carpet taken by the bride earlier, all wearing the traditional Omani white robes (called dishdasha) made distinctive with the lone tassel on the neck, multi-hued turbans called ammama wrapped around the conical embroidered cap called kumma, as well as colourful outer robes, with a silver khanjar, the traditional Omani curved dagger worn around the waist/hips, providing the finishing touch.

The groom goes up the dais and kisses the bride on her forehead. The entire hall erupts in cheers and applause. More picture-taking, with the family members from both sides.

The male members of the groom’s family then discreetly make a quick exit, leaving the groom behind for more photographs with the bride (who by then takes off her cape) together with friends and relatives, followed by the cake-cutting ceremony, more photographs, and more dancing by female relatives.

By this time, the female staff of the hotel — incidentally mostly Filipinas — are all sitting at the rear of the ballroom, resting, some grabbing a few winks, wondering when the party would end.

At some point, the bride turns her back on the crowd and tosses her bouquet at the frantic horde of yet-unmarried ladies. Everyone cheers as the victor raises the bouquet that she successfully captured, and the dancing continues yet again.

The party wasn’t over yet by the time I made my exit at around 1 am.  I didn’t have the opportunity to ask what time it finished exactly, as my flight to Dubai was at 5 am the next day, thus I had to leave the hotel at 3 am.

Perhaps the party that I saw is not representative of the whole Omani population, as not everyone may not be of the same financial capability. Perhaps the people of Oman are not representative of the entire Arab population either. But that night, as I stared in wonder and amazement at the drop-dead gorgeous women parading in front of me, clad in custom-made evening gowns paid for by their husbands or fathers which will never be worn more than once (!), adorned with jewelry also paid for by their husbands and/or fathers, sent to and from the wedding party in BMWs/Lexuses/Mercedes Benzes, all I could think of was how grossly inaccurate the Western media’s portrayal of the Arab woman is — i.e. the proverbial ‘oppressed’ woman, clad in black from head to toe. The women I’ve known and seen in my two visits to Oman, brief as they were, were nothing but oppressed. Nowhere else does the old adage ‘Don’t judge a book by its cover’ hold truer than in Oman.

35 Responses to An Omani Wedding