Mt. Bromo – One Of The World’s Most Ethereal Landscapes

I wrote an article about Mt. Bromo in 2008 and had delusions of getting it published, so I sent it to AirAsia’s in-flight magazine, Travel3Sixty, and put off posting anything about my Surabaya trip in my blog in the hopes that AirAsia would like the article enough to publish it.  (I thought the article might be of interest to AirAsia because they have direct flights from KL to Surabaya.) Unfortunately, I never heard from AirAsia — not even a ‘thank you for your contribution’ sort of thing — and I ended up forgetting about the article.

Then a few days ago, I saw someone post this breath-taking photo of Mt. Bromo on Twitter… 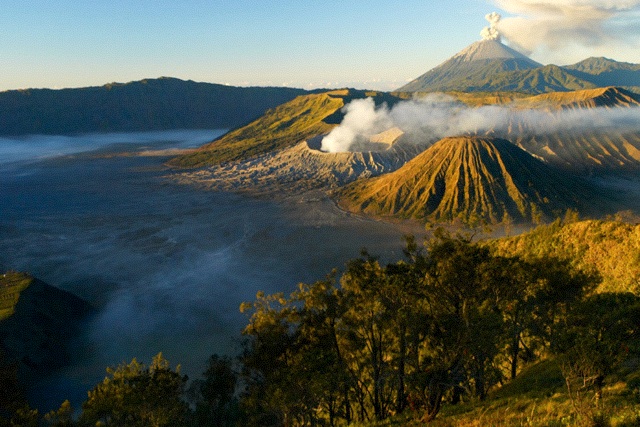 …which led to my scouring my harddrive for that long-forgotten post.

I thought of re-writing the article to make it short, like most of my travel posts in this blog, but I changed my mind and kept the article long, as I’d like to preserve the memories that I had from that trip. The article even ended up being longer than the original because as I kept adding more photos, I kept adding details, as well. So please bear with me, enjoy the pics, and do make it a point to visit Mt. Bromo if you get the chance.

P.S. This trip also marked my first encounter with a DSLR camera — a Nikon D80 — but some of the pics here were taken with a point-and-shoot camera. Can you tell which pics are which? :D

When AirAsia announced that it was giving away free seats to several Asian destinations as an anniversary treat, I spent countless hours looking for free seats on dates that would match my children’s school holidays. I started with the obvious first choices: the more “exotic” destinations such as Bali, Phuket, Bangkok and Chiang Mai.

When I told DH that I could not get any match, he suggested that I try Surabaya instead. He told me something about a volcano called Mt. Bromo, which we can reach by horseback.  The mere mention of the word “horses” got my kids all in a frenzy, so I grudgingly agreed.

Surabaya didn’t seem like a very popular tourist destination — I thought to myself — because I easily got the dates that I wanted. But then, I thought, since the fare was a mere RM175 ($51) per person for taxes and other fees, there wouldn’t be much to lose.

The months passed and finally, June came. We somehow survived the 2 1/2 hour flight to Surabaya, despite having to deal with 3 boisterous children under 10 and two equally active 15-month old twins with us. [NB: The twins are now 3 yrs, 7 months old. This is how long ago this post was!]

We slept for one night in a small hotel not far from Surabaya airport then departed very early the next morning to our primary destination — Bromo Tengger Semeru National Park in East Java. 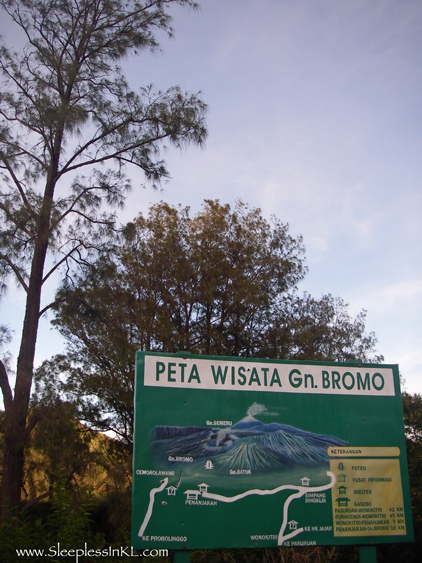 The bus slowly inched its way through early morning Surabaya macet (traffic jam) and after close to 4 hours, we started going up into a more mountainous area. The bus gingerly wound its way through the gently sloping roads lined with trees on the sides. And before we knew it, we were surrounded by fog! Everyone grinned as the temperature dropped gradually and the fog thickened.

We all practically leapt out of the bus by the time we reached Bromo Cottages in the sleepy town of Tosari, 1,700 meters above sea level.  The children ran around, taking pictures of the huge flowers by the balcony overlooking mist-shrouded mountains, as DH checked us in. 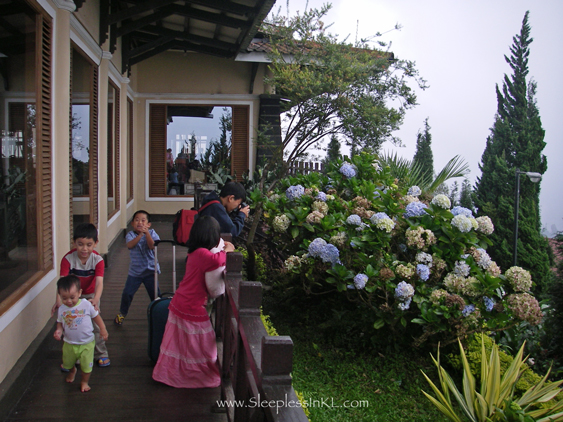 The hotel is not posh by any means but the gardens and the surroundings made me think that maybe, DH made the right choice after all.

I had a blast tinkering with my borrowed D80, taking pics of the flowers and spiders in the extensive garden, practicing how to focus manually with a 50mm lens, experimenting with various depths of field and marveling at the difference bokeh (a blurred background) makes.

I checked out the small gift shop for some fridge magnets but found only jackets, mittens, gloves, some toiletry items and postcards. One particular postcard caught my eye — an ethereal photograph of Mt. Batok and Mt. Semeru on a bed of thick, swirling clouds. I put it back on the shelf, telling myself that those things only look good in postcards.

Nevertheless, everyone slept early that night, to prepare for THE highlight of our trip — going up Mt. Bromo itself. The night air was very, very cold and everyone huddled under the polyester blankets, including the twins. 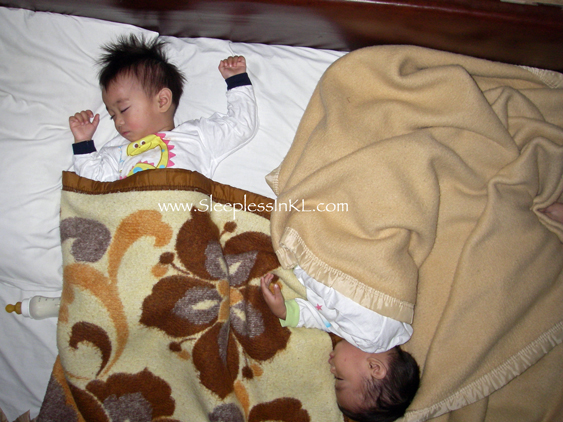 Lola (my mum) was the first to leave at 3.30 am to join a pre-dawn trek across the area’s famous “sea of sand” to watch the sunrise from the rim of the crater of Mt. Bromo, 2,392 meters above sea level.  Unfortunately, not a single person in her group brought a camera along with them.

The kids and I left Bromo Cottages with DH at 6 am, leaving the twins with the maids. The kids were in exceptionally high spirits, considering the early hour, chattering nonstop in the van. I muttered a prayer under my breath as the driver expertly maneuvered the van through the winding mountain road. I gazed, enthralled, at the rows and rows of vegetables neatly lined up on the steep mountain slopes — cabbages, potatoes, tomatoes, cauliflower, and the regions’s staple food, white corn. 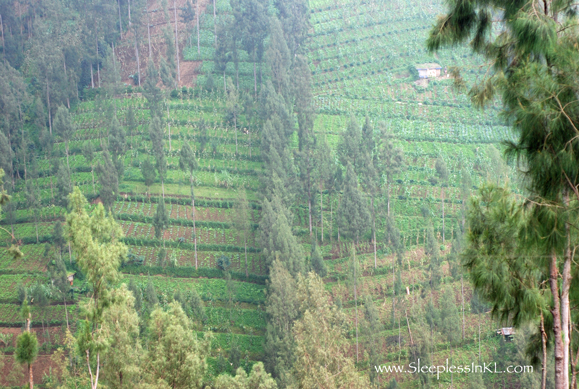 We went higher and higher up the narrow trail and suddenly came upon what looked like a lookout point. The driver parked at the side of the road and everyone ran out of the van. I stopped dead in my tracks when I saw the view — it was exactly like the postcard that I saw the night before! 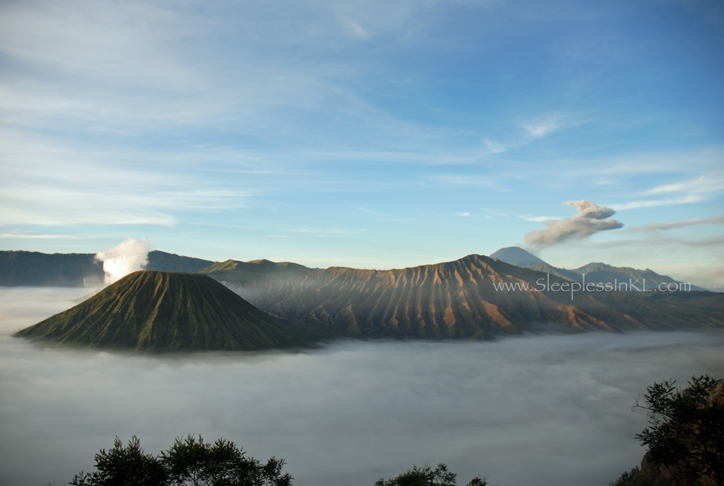 The sky was pale blue, the clouds immaculate white, Mt. Batok emerald green, Mt. Semeru golden brown. The mountains were floating in a swirling sea of  clouds. Mt. Bromo was behind Mt. Batok and all we could see of it was a fluffy column of white smoke. There was smoke emanating from Mt. Semeru, as well, but it was a menacing dark grey colour, in a shape curiously resembling a leaping rabbit. The slopes of both Mt. Batok and Mt. Semeru looked like gentle folds of a lady’s velvet skirt. I pointed them out to the kids, explaining that they were actually formed by lava flow. I marvelled at how such beauty can emanate from what would have been great tragedy in past explosions. 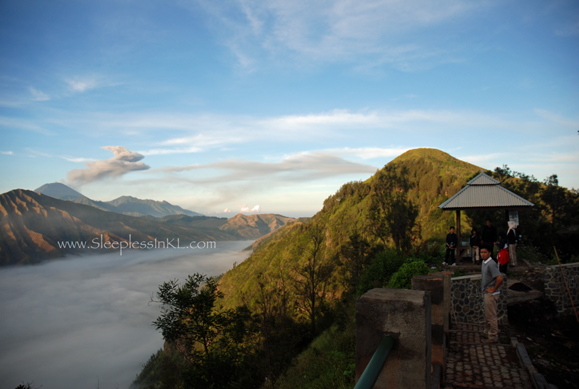 After snapping tons of pictures of the magnificent view and of ourselves (as though standing against a painted backdrop), we ran back to the van to proceed with the rest of our journey.  At this point, the van started to descend as the trail became more steep.  Before we knew it, we had plunged into the sea of clouds that we were admiring earlier. 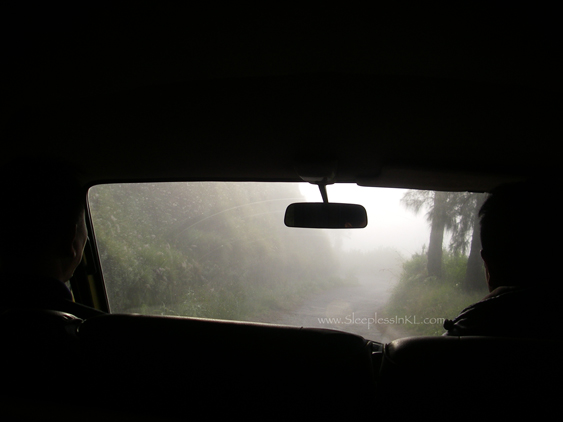 The hazy blanket cut our field of vision by less than a meter and the only way the driver could have found his way was through experience and memory. Everything was eerily still and nothing could have prepared us for the sudden appearance of a man on horseback. 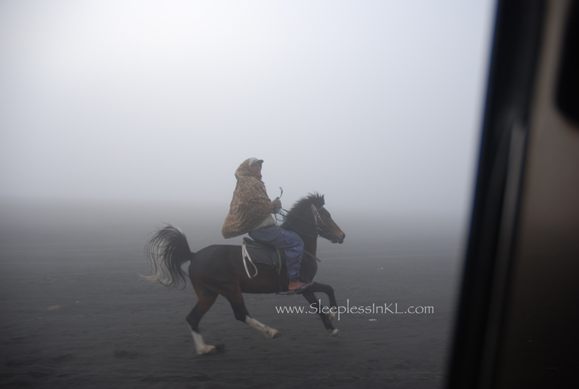 Note how the horseman is only wearing a sarong tied around his head and shoulders to ward off the cold. And how he’s only wearing rubber slippers!

Then there were two, then more, maybe five. The driver slowed down and rolled down his window and he exchanged words with the first rider. The rider tried to slip a small white card to the driver, but the driver refused to take it.  He was apparently trying to convince our driver to hire him and his friends to take us to the foot of Mt. Bromo. The driver politely declined, saying that everything has been taken care of already, then rolled up his window. He resumed his driving at what I considered was a break-neck speed, considering the poor visibility.  To our amazement, the horsemen gave chase! The children cheered as two horsemen raced neck in neck with us, one horseman on each size of the van.  When a small pony overtook us, we all laughed at the comical sight of a big man riding such a small pony.

When the van finally came to a halt, a herd of horses and their horsemen gathered all around us, fighting their way among the crowd to get picked! 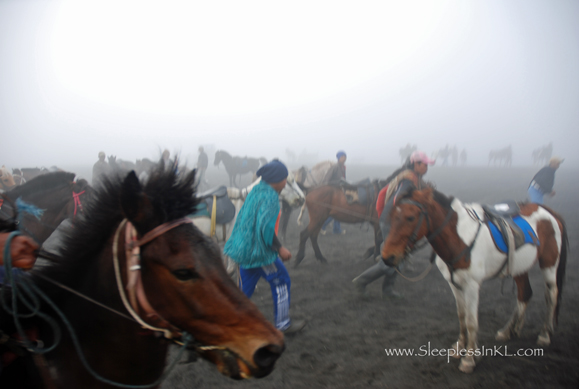 Horsemen in a frenzy 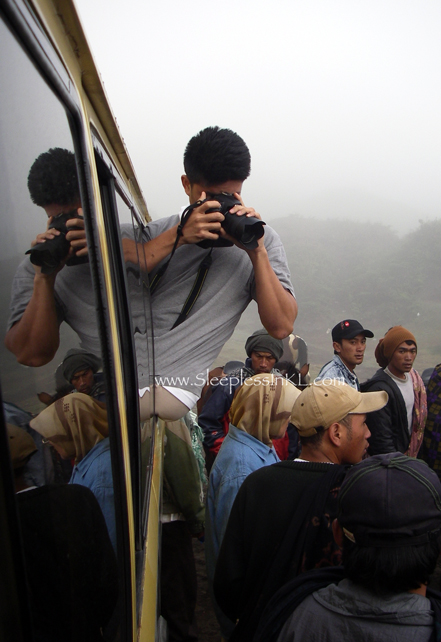 I love this shot! It’s got a National Geographic feel, don’t you think?

Luckily, as we had everything pre-arranged, the mob dispersed quickly, vanishing into the mist. 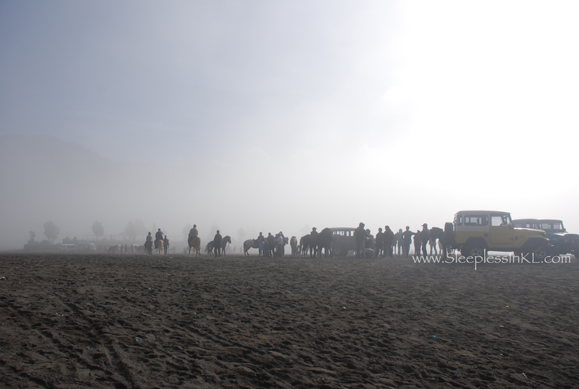 Lola and her group arrived just to in time to join us for the final part of our ascent.

The kids were the first to get on their horses and I feared for their safety as their guides took them away. Lola and I followed behind. I spent the first few minutes getting used to the gait of my horse, which wasn’t easy because of the rocky terrain. My guide told me to lean forward when the trail is ascending and to  lean back and straighten my legs as we go down.  I relayed the message to my mom, as she had difficulty understanding the instructions in Indonesian language.

DH insisted on walking alongside our horses. But after a few meters of a rocky, dusty path, he changed his mind and got on a horse of his own. 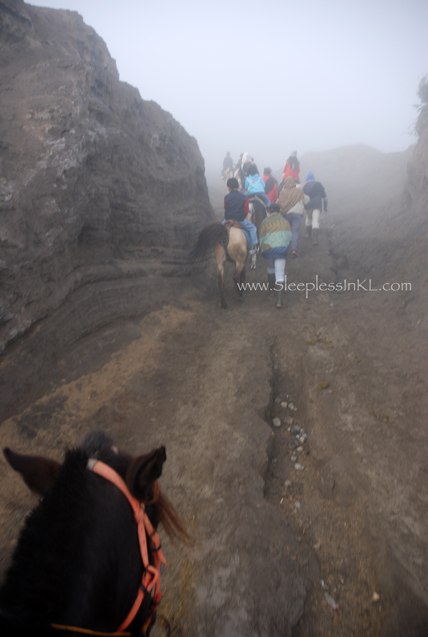 Our trek on horseback didn’t take very long, much to the children’s disappointment. 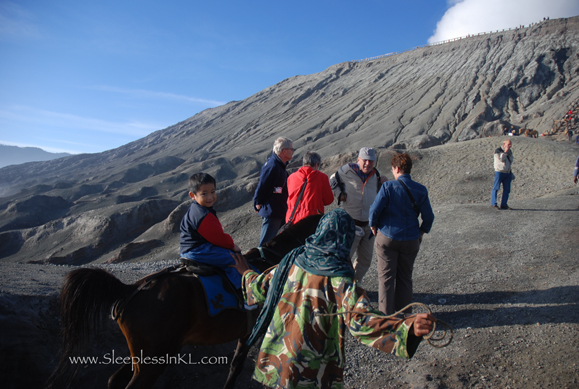 But the sight of the concrete steps going up the side of Mt. Bromo immediately made them forget about the horses, and they wasted no time in commencing their ascent. 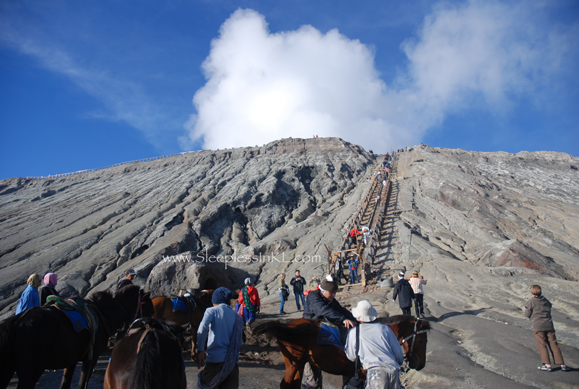 The steps were many but were quite small and manageable. The air did become a bit thinner as we went higher and higher, forcing us to pause every once in a while. It helped that the flight of stairs had two lanes — the left one for going up, the right one for going down. [NB: These photos were taken when the stairs were still under construction. The stairs and railing on the summit have long been completed since then.]

The view from the top of Mt. Bromo was absolutely breathtaking. From the summit, we could see the sea of clouds slowly thinning in sections. 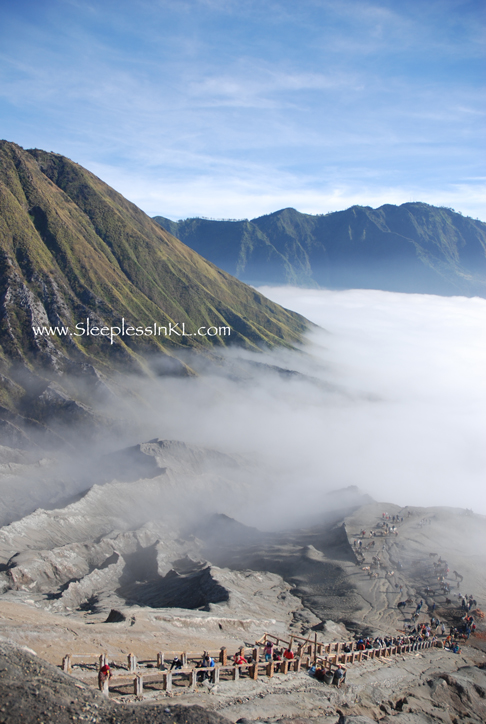 Mt. Bromo’s crater was huge and, although it did not have a visible bubbling cauldron of lava, there was a thick plume of white smoke emanating from its depths. 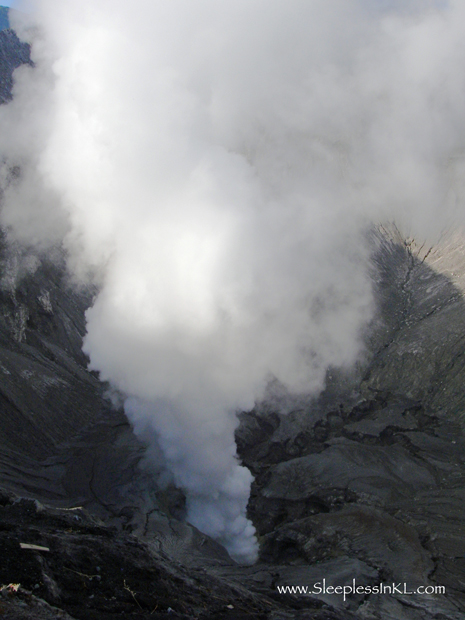 Here is the summit of Mt. Batok in full majestic splendour. 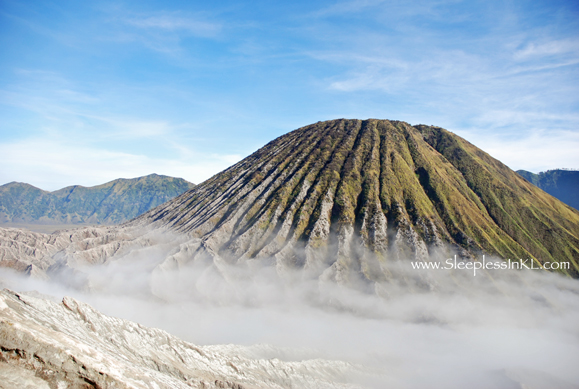 Finally, after countless poses from all possible angles in the limited space on the summit, we began the slow descent back into the waiting pack of horses. 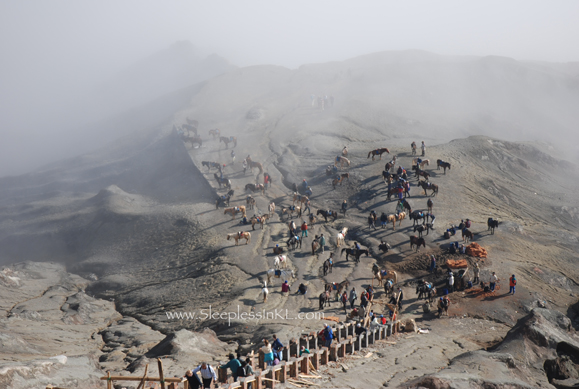 The children gleefully reunited with their respective horses and guides. 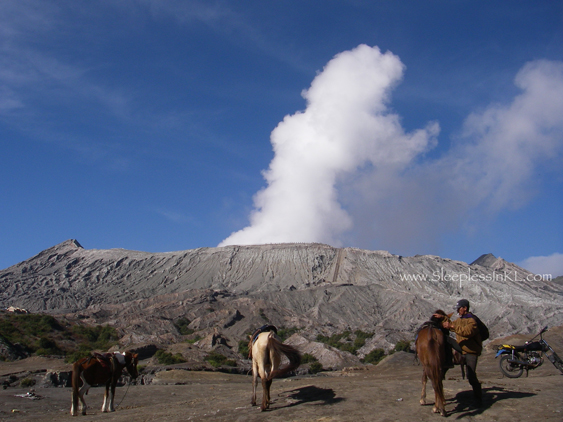 Before getting back into the van, we all made a quick toilet stop in the lone toilet facilities in the area. We paid something like Rp5,000 per person, which is around USD0.50 — not a huge sum per se, but exhorbitant by Indonesian standards. 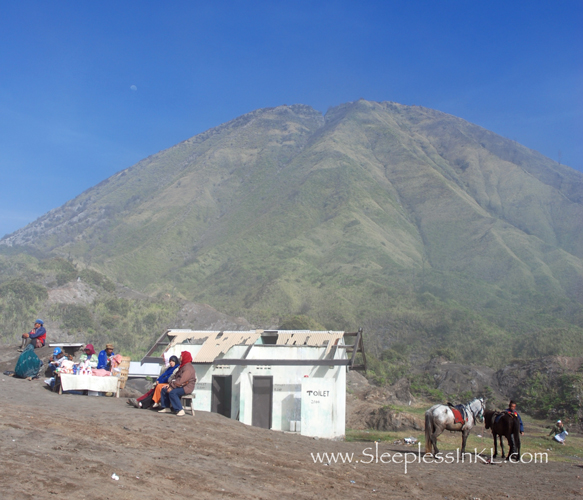 On our way back to our hotel, we passed by the same spot where we took pics of the ‘Sea of Clouds’. By then, the mist has cleared away, showing us the path that we took earlier. The view, although beautiful, has lost its magic without the swirling clouds in the valley surrounding the majestic volcanoes. 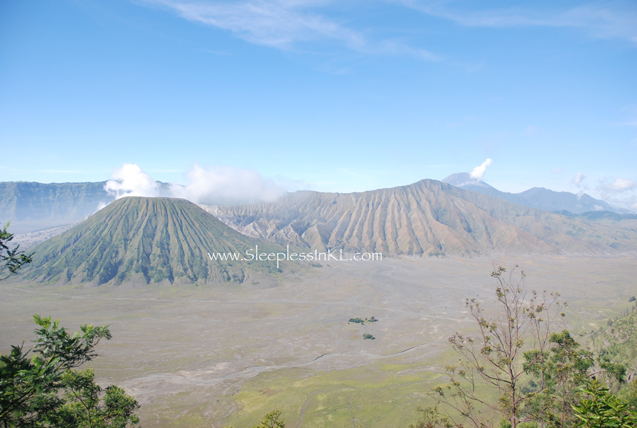 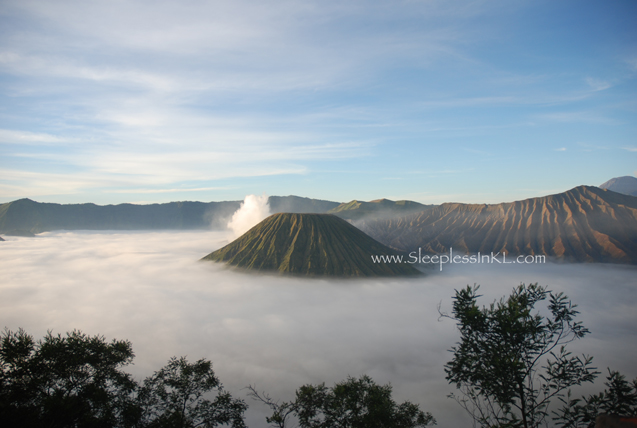 Posted under Travel and tagged with Bromo, Indonesia, Surabaya
Comments (45)

45 Responses to Mt. Bromo – One Of The World’s Most Ethereal Landscapes