Putrajaya On A Sunday

A good friend from Sydney is in town for a very short visit and I drove her to Putrajaya yesterday as part of our whirlwind tour of KL and its environs.

Putrajaya is a city south of Kuala Lumpur that serves as the federal administrative centre of Malaysia. It’s where the office of the Prime Minister is located, as well as head offices of the Ministry of Finance and Royal Customs Malaysia, among others. It’s not far from KL International Airport (KLIA) so if you are in KL with 4 hours to spare and don’t need a visa to get into Malaysia, by all means, please check in for your connecting flight early, then rush out of the airport for a quickie tour of Putrajaya.

Putrajaya turns out to be such a pleasure to visit on a Sunday. Traffic going into and out of the city was very smooth. We actually managed to stop and park at the kerb at several points to take photos.

This is my favourite shot from yesterday’s trip. That’s the Putrajaya Mosque on the left and the Prime Minister’s Office on the right.

The guards didn’t even give me a sideways glance when I decided to stand in the middle of the road to take this photo. 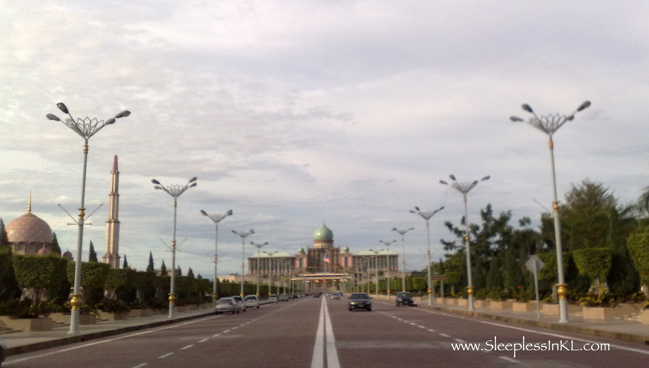 All photos taken with my trusty Nokia N82. Note to self: go to Putrajaya on a Sunday armed with a DSLR camera next time!

Posted under Malaysia and tagged with Putrajaya
Comments (4)

4 Responses to Putrajaya On A Sunday