So when DH handed me such an envelope early Wednesday morning last week, I hastily opened the letter, my eyes scanning the letterhead — Imigresen Malaysia — and the first line of the first paragraph to see if it contained ‘dukacita‘, i.e. regretfully, which always means bad news, or ‘sukacita‘, i.e. with pleasure, which, of course, means good news.

The letter started with sukacita but it took a few minutes to for the implications of the letter to sink into my groggy consciousness.

Dengan hormatnya saya merujuk kepada perkara diatas dan sukacita dimaklumkan bahawa permohonan puan diluluskan. (With respect, I refer to the above matter and, with pleasure, I wish to inform you that your application for the same has been approved.) 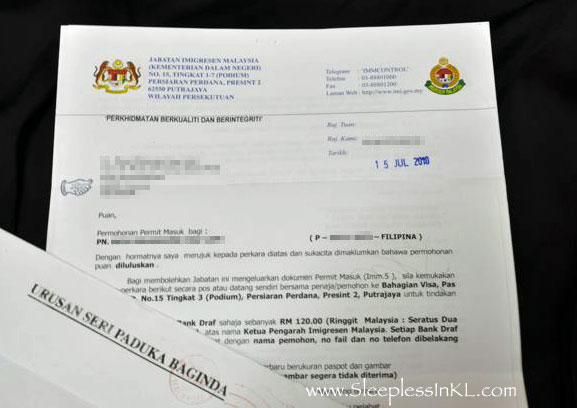 I did it! Fourteen years of marriage and five children later, I finally get the long-awaited approval for my application for a Malaysian PR (permanent residence)! This marks the end of countless visits to Immigration office. To give you an idea of what I had to go through, I started with a 15-day visa, then 30-day visas (3 times, I think), followed by 3-month visas (3 times?), 6-month visas (2 or 3 times?), then yearly visas (5 of them), each time going there with my long-suffering husband in order to prove that the marriage does exist and that we are still together. I was only able to apply for PR after the 5th yearly visa, which was about 2 years ago. [NB: Malaysian men: If you’re thinking of getting a foreign wife, better brace yourself for all this hassle!]

Of course, I have one more visit to make to the main office of Imigresen Malaysia in Putrajaya to submit a bank draft for RM120 (~USD38), a letter of oath signed by my husband and I certifying that we are still married and still together (‘perkahwinan masih kekal‘), my most recent passport-sized photographs, etc for the processing of my PR.

So what comes next? I checked with my cousin to find out. She is also married to a Malaysian and has been in Malaysia for about the same length of time as me. She told me that it took almost 2 years for her to get her red IC (Identity Card) after submission of the bank draft and documents. [NB: Malaysian citizens have blue ICs.] But — here is the big but — she told me that I will still hold a Philippine passport; the only difference is that I won’t have to go to Imigresen anymore to renew my visa every year. She added that she was told that it is possible to apply for citizenship but she’s quite unclear about the procedure.

I guess I’ll just have to take this one step at a time. It’s been a long and winding road but I am thankful to God that I am finally past the first hurdle.

Update 10th June 2012: I finally got my Entry Permit in late 2010 and my red IC (identity card) four months later. With my red IC, I now go through the Malaysian lane in the airport (and even got scolded the one time I queued up at the foreigners’ lane), get the same benefits and rates as Malaysian citizens in government clinics and hospitals, and generally get better treatment in banks and government offices, i.e. like a Malaysian citizen.

The Immigration Department has also introduced a new points system when applying for an Entry Permit: http://eis.imi.gov.my/entry_permit_calc/proses.php. Points are calculated based on one’s age, relationship to a citizen/resident, investment in Malaysia, bank accounts (minimum: RM100,000!), job opportunities provided to Malaysians, Malay language proficiency, etc. The points calculator page also comes with a disclaimer: “Please take note that this assesment tool is only to show your possible points score. Should you wish to apply for an Entry Permit, it will not guarantee a successful application. Successful application depends on your complete application and supporting evidences submitted to the Immigration Department.” I can only foresee the procedures and system to change again in the years to come, as they always have over the years. Wives of Malaysian citizens have probably the best chances of getting a PR, especially once they have children (who will be Malaysian citizens, thanks to their father).

Update 9th September 2014: Apparently, it is possible for the wife of a Malaysian citizen to apply for citizenship after having been a Permanent Resident for two (2) years. Read the details in this post.

Posted under Malaysia and tagged with Permanent Residence, PR
Comments (182)