Tavuk göğsü is probably the most interesting food that I got to taste in Istanbul during my week-long stay there. At first glance, it looks like some sort of thick white pudding. Dig in with your fork and the consistency will remind you of melted mozzarella, but slightly tougher and not as stretchy. Nibble on it and the taste resembles mahalabia (Arabic rice and milk pudding)…but as the last of the creaminess melts in your mouth, suddenly you find yourself chewing on bits of white chicken floss. 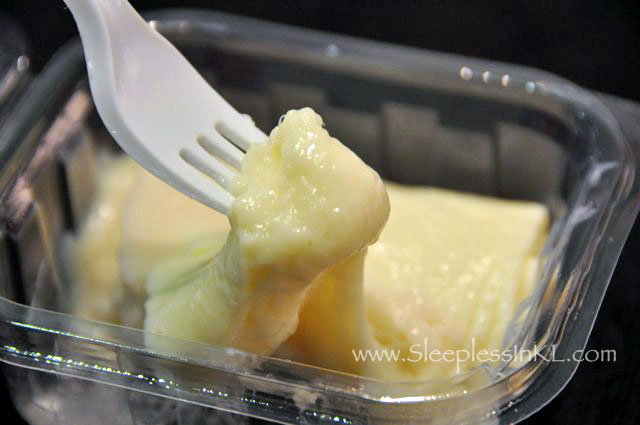 And so I relied once again on good old Google to find out what tavuk göğsü is made of. It is indeed a Turkish dessert pudding made with chicken and milk! A contradictory combination? To 21st century taste buds, perhaps. But apparently, it’s been around since the Roman times and introduced (or perhaps reintroduced) into Anatolia by the Romans. Wikipedia says it became one of the most famous delicacies served to the sultans in the Ottoman Topkapı Palace and is today considered a ‘signature’ dish of Turkey.

Personally, I found tavuk göğsü to be quite tasty and filling. But then again, I’m a Filipina who likes chicken macaroni salad that comprises of boiled elbow macaroni, mayonnaise, cheese cubes, raisins, pineapple bits, condensed milk, and shredded chicken, a sweet and savoury Filipino dish that perplexes most Malaysians except the Kelantanese, who’ve always loved all of their foods sweet.

Check out FX Cuisine’s step-by-step instructions on the making of this interesting Turkish chicken dessert.

Posted under Food,Travel and tagged with Istanbul, Turkey
Comments (6)