For some reason or another, I’ve always prefer staying somewhere other than the usual international hotel chains. I throw caution to the winds and book a stay in a Swiss farmhouse near the French border or a boathouse that’s just a tram ride away from the centre of the endless party of Amsterdam. And if I must stay in a hotel, I scour the internet for recommendations on boutique hotels. I am soooo fond of them; they’re all unique and cozy and feel more personal as compared to international hotel chains.

So when DH and I went to Istanbul in October 2010, I was elated to secure two nights’ stay at Hotel Ambassador, a boutique hotel in Sultanahmet area that received such high praises from National Geographic Traveler’s blog which I quote below:

“While I’m a long-time fan of Istanbul’s boutique hotels (a decade-old trend that just seems to keep improving), there’s a new favorite on the horizon. As a rule, these places are usually reasonably priced, very comfortable, accommodating, and are well located in the city’s oldest quarter, Sultanahmet. Though the Hotel Empress Zoe–located in the shadow of the Hagia Sofia–has been a perennial front-runner, with the Hotel Nomade surging in second place, my new favorite is the Hotel Ambassador. A sleek neighbor to the Nomade, The Ambassador is centrally located, has an amazingly friendly and helpful staff, wireless internet throughout, and, at 100 Euros a night, is a steal. Still, the best part about it is its amazing rooftop terrace: with free morning guest breakfasts and a bar for afternoons and evenings. The view alone is worth it.”

“The view alone is worth it.” A statement that held a world of promise. The rate we got was 120 Euros a night so it better be worth it!

So was it worth it?

First off, after suffering through Hali Hotel‘s insufficient heating system for three cold, miserable nights, the steady warmth of Hotel Ambassador’s thermostat  definitely made it worth it. As did the immaculate modern room… 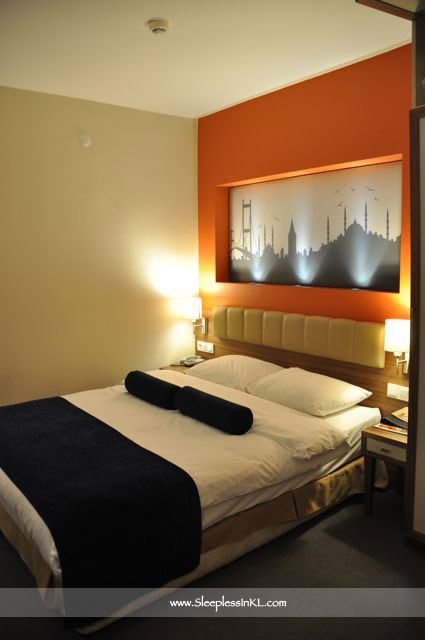 …and the spanking clean bathroom.

Never mind that everything was a wee bit too compact that I hardly had enough room to snap this photo. 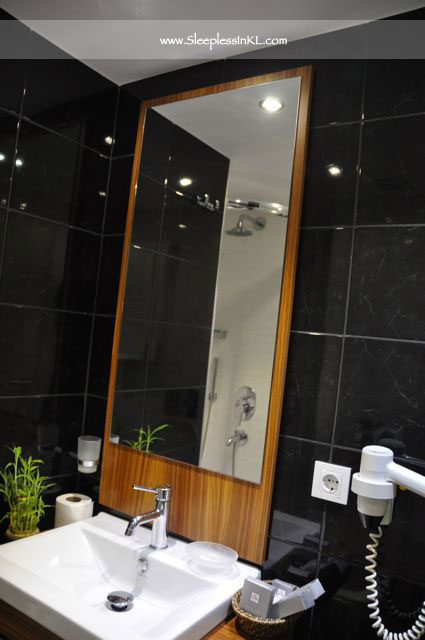 The litmus test came during breakfast the next morning. We were promised a magnificent view and that was to be had from the rooftop breakfast terrace. And boy! Did it hold up to its promise!

Imagine yourself having breakfast in this charming balcony, overlooking the Marmara Sea and a magnificent view of Ayasofya (Hagia Sophia) on the left… 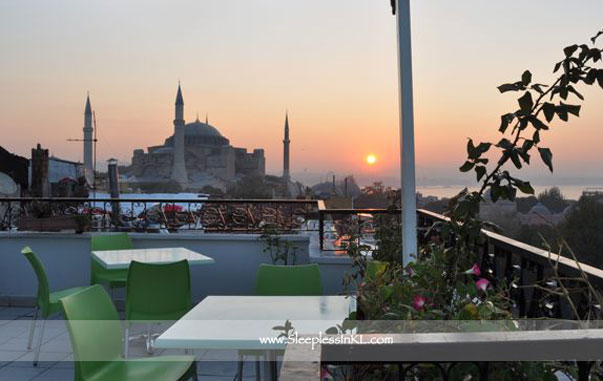 …and the Firuz Ağa Mosque (Turkish: Firuz Ağa Camii) on the right, with the Blue Mosque just behind it in the distance. 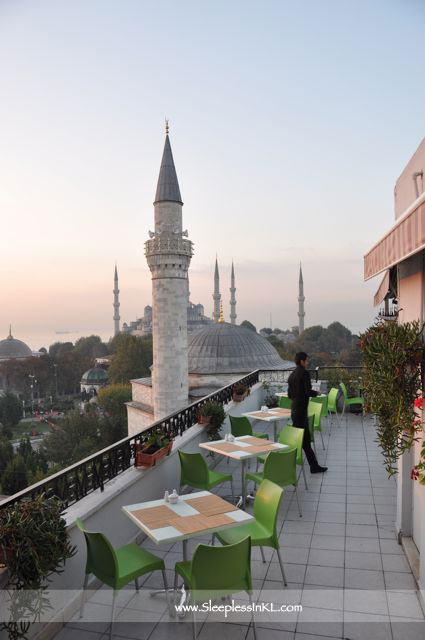 If you are up early enough, you just might get rewarded with a breathtaking view of the sun rising over the horizon, its rose-tinged fingers dabbing some colour on to the blue-grey Turkish skies. 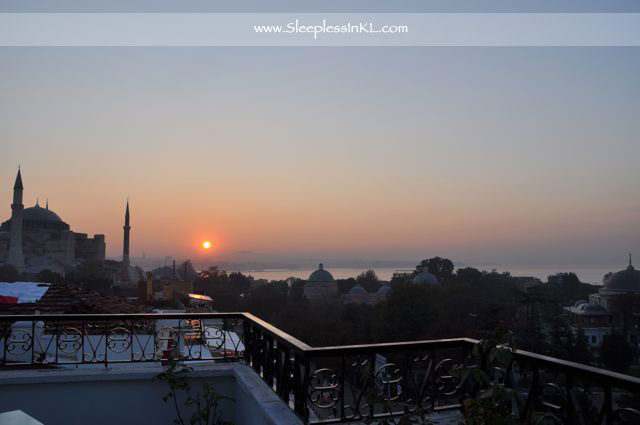 You might even be able to see the fiery ball of sunshine linger over Galata Tower, as I did in a classic case of the early bird catching the proverbial worm. 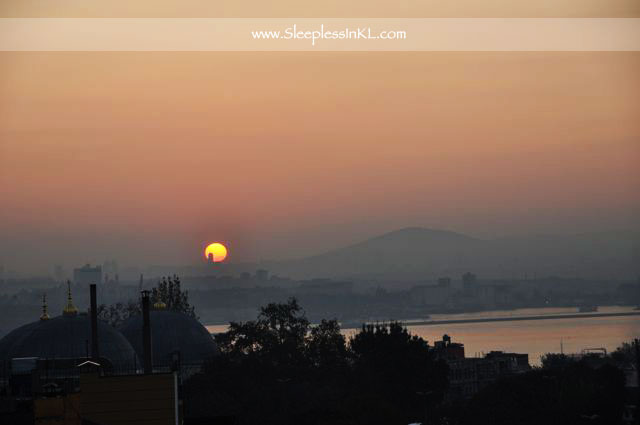 By now, if I’m to tell you how just sumptuous the breakfast spread was at Ambassador Hotel, it probably would not matter so much anymore. 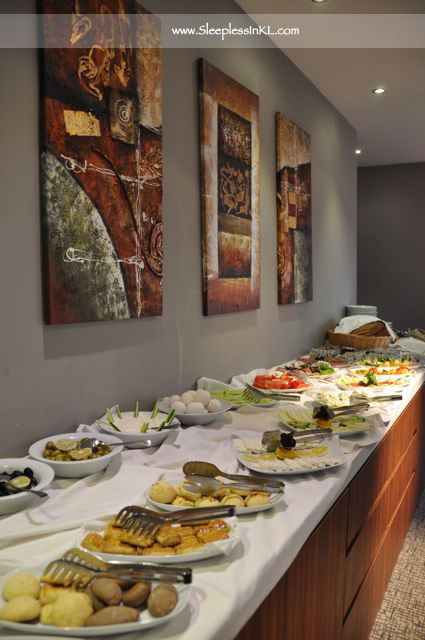 One day, when I get another chance to visit Istanbul again, I would spend a night or two sitting in this cozy covered nook in the terrace and enjoy the view that this charming boutique hotel has to offer. 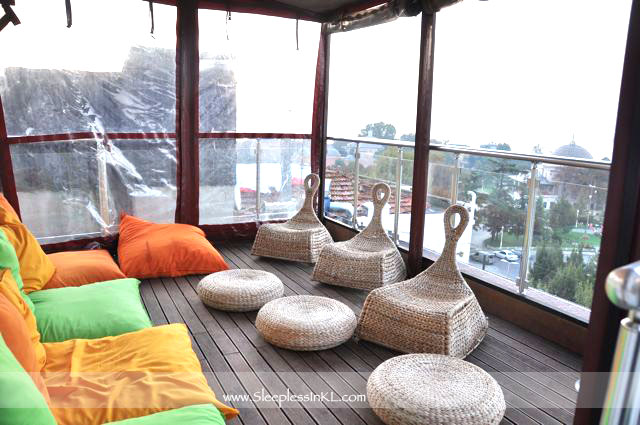 Getting there: Take the tram and get off the Sultanahmet station. Make sure you are on the same side as the restaurants and souvenir shops. Walk towards the direction going to Ayasofya but turn left at the first street, Ticarethane Sokak (often shorted to ‘Sk’), walk past even more restaurants, then duck into the first alley on the left (again, past rows of tables). Hotel Ambassador is tucked away on the left. 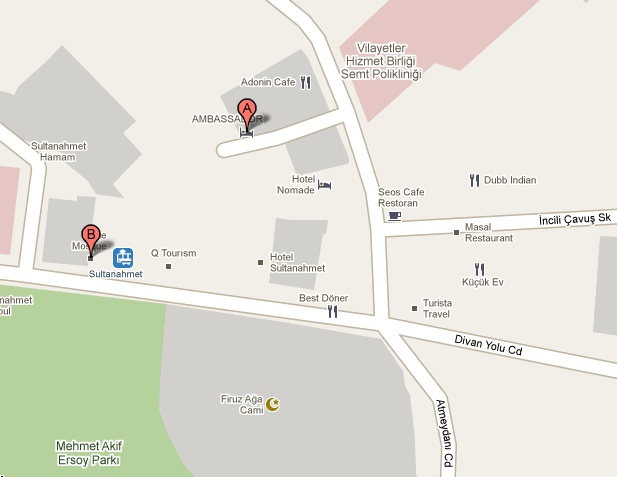