When I visited Istanbul in October 2010 on a business trip, Turkish glass mosaic lamps seemed to be in every street corner (at least, the streets frequented by tourists). True, there were carpets in every street corner as well. But buying carpets was out of the question because (i) you can get ripped off if you don’t know what you’re doing and I absolutely know NOTHING about carpets, (ii) they’re too heavy and unwieldy to carry, and (iii) I’m just not into carpets that much. So the more I thought about it, the more I became obsessed with the thought of buying some Turkish glass mosaic lamps to bring home with me.

As fate would have it, I had with me a fairly large hard-case Samsonite bag full of samples and brochures upon my arrival which was practically empty for my return trip. And that’s how I managed to bring back the ultimate souvenir ever — a seven-tier hanging Turkish glass mosaic lamp. 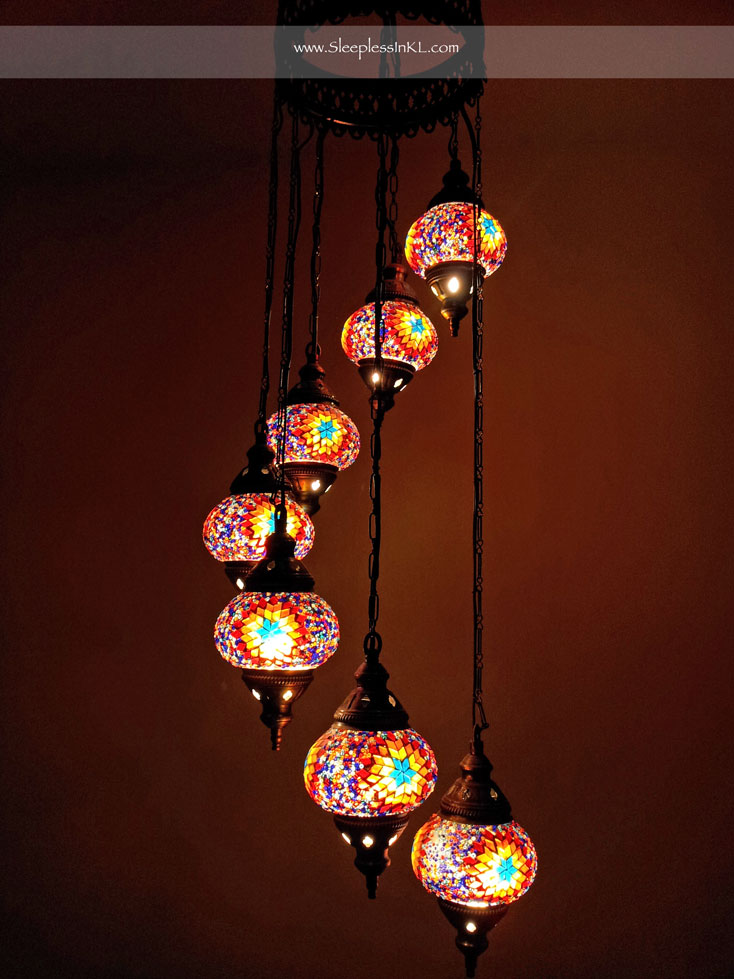 Deciding on buying a Turkish glass mosaic lamp was the easy part; I then had to pick out the colour (which came in every imaginable colour scheme and combination), as well as the number of ‘balls’ hanging from the lamp (they came in sets of 5’s, 7’s, 9’s and so on). After much lip-biting and palpitation, I finally picked out this multi-coloured versatile piece so that it could match most any colour scheme for my house. And seven lamps looked just about right. Five lamps don’t ‘swirl’ downwards as nicely as seven do; and nine would have required a much higher ceiling height to hang the lamp from.

I’d consider the purchase to be quite an ambitious feat for me — a huge gamble even! — because it meant wrapping each glass ball with newspaper, then covering it up with a piece of clothing, then arranging them carefully inside my bag, padding in all the nooks and crannies, so that everything would fit just right with no moving pieces whatsoever. I think I must have held my breath during the entire journey back home, with my breathing only restored to normal after having gone home and seen that the lamp survived the flight, intact and unscathed (thanks, Malaysia Airlines for handling my bag well!).

The purchase also seemed like an extravagant whim at the time because I had no place to hang the lamp in my house, given how the average Asian house’s ceiling height is quite low.

Almost two years later, we redid the staircase in my house out of necessity…and I finally managed to get a spot with just enough ceiling clearance from which I could hang THE lamp of my dreams. Unlit, the lamp looks quite unassuming. But once awash with light, they dazzle and mesmerize with their patterns and multi-coloured hues. 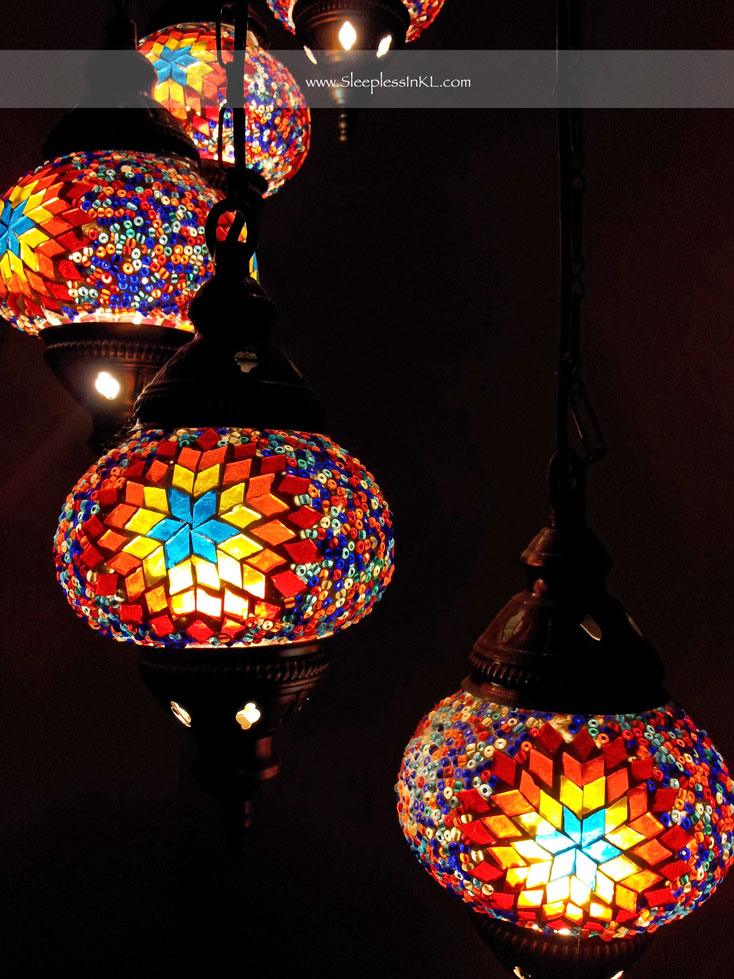 My little gamble paid off. I’ll always have a piece of Istanbul with me in hot and humid Kuala Lumpur. 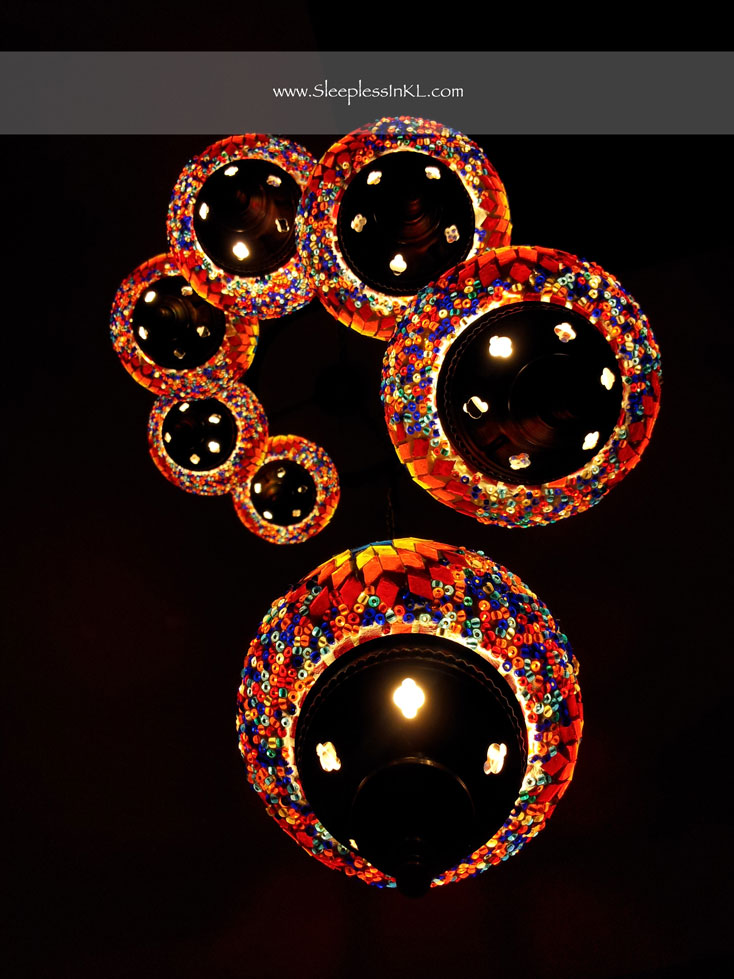 1. In addition to this seven-tiered lamp, I also bought a medium desktop lamp (in brown) and a small pendant lamp (also multi-coloured, but darker and more subdued) which now hangs by my front door), pics of which I shall post later on.

2. If you don’t have enough space for such a lamp in your luggage, the next best thing is to buy some glass mosaic tealight candle holders (I’ve seen these at the Egyptian Spice Market but can also be found in the Grand Bazaar): 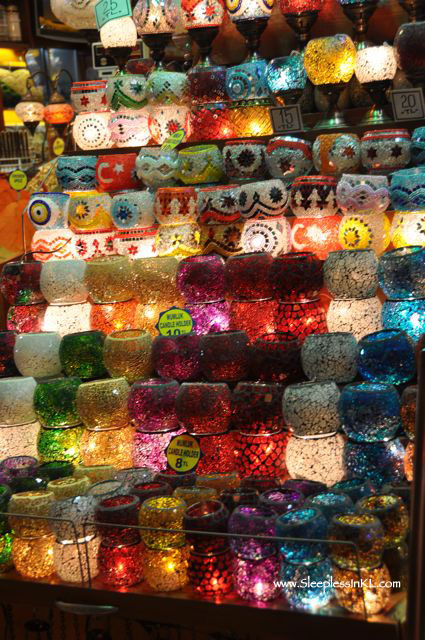 They’re so pretty yet very affordable, with prices starting from 8 Turkish lira (approximately $4.50).

3. The hanging lamp uses the standard E14 light bulbs. I strongly urge you the energy saving version — they are a bit more costly but they last longer than conventional bulbs and save you a small fortune in your electricity bill.