The Next Step: Application For Malaysian Citizenship

I was in Putrajaya last week to settle some paperwork with Imigresen (Immigration) and Jabatan Pendaftaran Negara (National Registration Department) a.k.a. JPN for short. As expected, the process was tedious and cumbersome and involved a lot of running around from one office to another. But I consider all of that hassle as negligible, considering how  that particular trip led to an unexpected blessing — I managed to find out that I am now actually eligible to apply for Malaysian citizenship! At long last, the question I’ve long been asking has finally been answered. 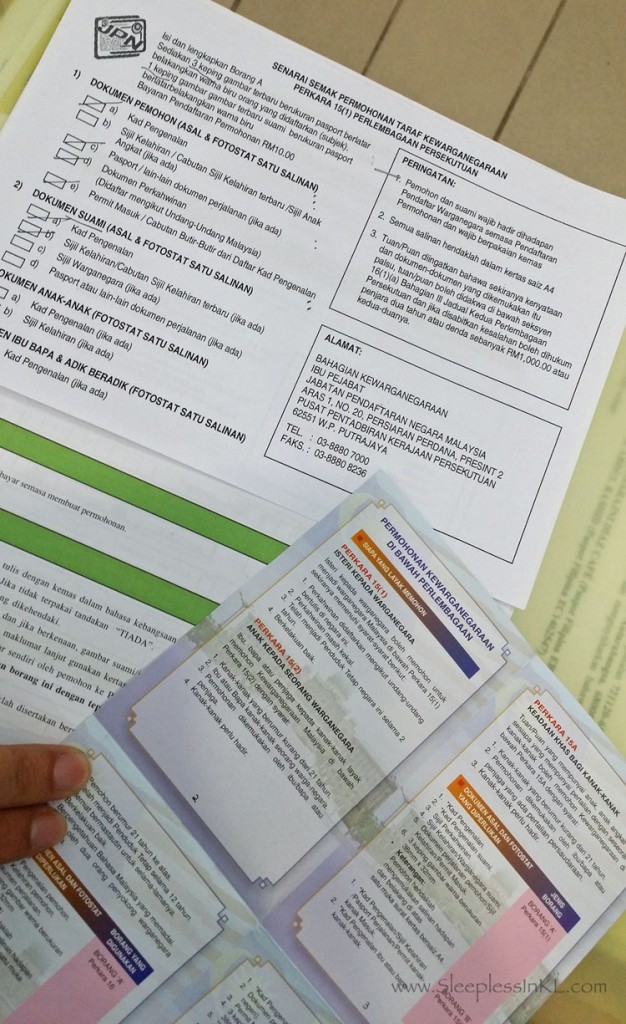 1. The marriage was registered according to the written laws of this country.
2. The marriage is still valid and in force (for lack of a better term as I type this at 2339 hours on a Monday night).
3. I have been a Permanent Resident for at least two (2) years.
4. Good behaviour.

For my application, I need to prepare the originals as well as photocopies (front and back copies of the same document in a single sheet) of the following documents:

The application must be submitted personally by the applicant to JPN’s head office in Putrajaya, and the applicant must be accompanied by her Malaysian husband.

The application form mentions that there will be an application fee but did not state the amount specifically.

JPN’s website states that it will take 12 months for them to process the application to become a Malaysian citizen, then the applcation will be sent to Kementerian Dalam Negeri (Ministry of Home Affairs) for final approval.

I’m stoked. I’m nervous. Time to get all the documents in order and drag DH along to JPN Putrajaya stat. Wish me luck!

13 Responses to The Next Step: Application For Malaysian Citizenship